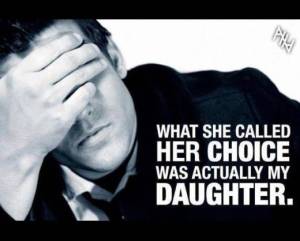 Stand Up For Zoraya ~~> No Contact for Daughter and Father

I expressed my concerns for Zoraya’s behavior to three Supervised Visitation Monitor/Reporter after visit with daughter. For Zoraya’s safety and well-being!!

The World’s Largest
“Why You Matter To Your Daughter” Author Peggy Drexler writes, “It’s no secret that the past few decades have transformed traditional gender relationships. Both men and ..
A “traditional” division of parental roles during a marriage should not of itself mean that the father should not be considered as a custodian following divorce.
Posted by American Fathers Liberation Army

“Justice is a part of the human makeup. And if you deprive a person of Justice on a continuous basis, it’s really an attack (and not to get religious or anything) but it’s an attack on the human soul. We have, as societies, evolved ideas of Justice and we have done that because human nature needs Justice and it needs resolution. And if you deprive somebody of that long enough they’re going to have reactions…”
~ Juli T. Star-Alexander – Executive Director, Redress, Inc.

Please friends, help us reach as many as we possibly can on this Demand for Reform. This is for the assistance, support, and justice which are often denied because the alienating parents we have lived with, the one who haunts our being, they still hold us captive AND ARE enabled by family court terrorist. This isn’t so much about what’s happened to us, but it is most certainly about what could happen to our children and how our entire system will view what is needed to help these potential victims and hopefully survivors find a recovery process that helps them to live on in happiness. These family court terrorist don’t realize and will never accept responsibility for their actions, so it is up to US, all persons, from these monstrous controllers. Please help and pass this forward, ask those who have been harmed, those who fight for the abused, those who speak up for the RIGHTS OF ALL LIVING BEINGS; we need to see inside these horrific abuses in our homes and the lifelong pains of those who have endured any interaction with Florida’s Family Court.

Mandate 50/50 physical custody nationwide of all FIT Parents, in initial custody issues, make BOTH Parent equally responsible for raising a child. “There’s no more important ingredient for success, nothing that would be more important for us reducing violence than strong, stable families, which means we should do more to promote marriage and encourage fatherhood,” Obama said.

Divorce & Corruption a Persistent Pursuit for Justice: Corrupt Lawyers and the Absurd Legal Decisions in the Fraternal Order of Matrimonial Law with David Inguanzo at Miami-Dade Commission on Ethics & Public Trust.