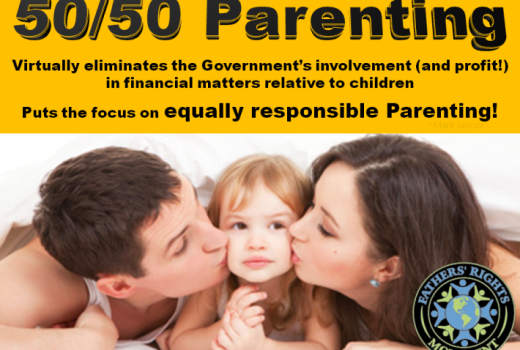 Ignoring mountains of empirical data that shows shared parenting to be in the best interest of families.

A System Out of Control 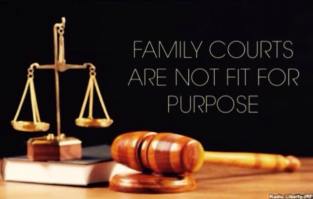 Florida is also one of several states to still have permanent alimony, meaning the payor makes payments for the rest of their, or their ex-spouse’s, life.

Permanent alimony was necessary in the days when women rarely worked outside the home. But the growing employability of women and the rise of no-fault divorce has led most states to abandon permanent alimony.

SB 668 would have done away with permanent alimony and provided judges with more guidelines to determine both the length and the amount of the payments.

“It would have given the judges and court system a lot more guidance on what they can and can’t do,” Karges said. 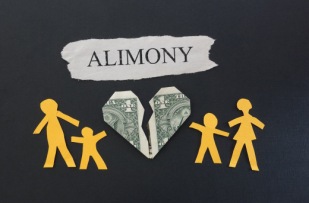 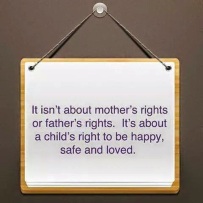 Recently, a bill in Florida was vetoed by Governor Rick Scott that would have reformed the state’s alimony and child custody laws.

Scott’s decision to veto SB 668 is baffling considering it was receiving 3-to-1 support and the legislature passed it by a 2-to-1 margin. His choice is even more confounding after hearing the logic behind it.

“Current law directs a judge to consider the needs and interests of the children first when determining a parenting plan and time-sharing schedule,” Scott said in a letter to Secretary of State Ken Detzner. “This bill has the potential to upend that policy in favor of putting the wants of a parent before the child’s best interest by creating a premise of equal time sharing.”

In actuality, what the law would have done is require judges to start with the premise that children will be granted equal access to each parent. Contrary to what opponents claim, the law does not mandate a 50-50 custody split.

After beginning with the presumption of shared parenting, judges would then consider 20 factors regarding child custody that already exist in Florida law. If the judge decided a different allocation of parenting time was in a child’s best interest, then they would be required to explain why.

Once again, Scott and the bill’s opponents are ignoring mountains of empirical data that shows shared parenting to be in the best interest of families. And by bowing to special interest groups, Scott is providing another frustrating example of why it is so difficult to pass family law statutesthat would clearly benefit parents and children. 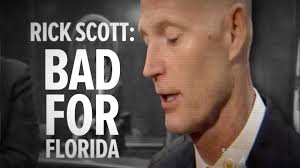 END_OF_DOCUMENT_TOKEN_TO_BE_REPLACED

Fighting to preserve Parent–Child relationships to improve the lives of children and strengthen society by protecting the child’s right to BOTH Parents!… READ MORE http://www.facebook.com/childrensrights.florida
Stop Emotional Child Abuse

By now, you have probably heard about the case out of Michigan where a family court judge sent three siblings to juvenile detention for refusing to visit their estranged father. The children’s parents divorced five years ago and have been battling in court ever since over custody. On June 24, the children—ranging in age from 9 to 15—were deemed in contempt by Judge Lisa Gorcyca for disobeying her order to “have a healthy relationship with your father.” All three children were… 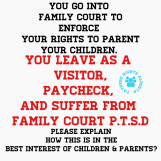 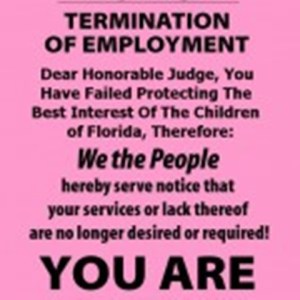 Here we are starting another year in the same position as last year and the year before that and the year before that. Three years now since I saw my two children and three more to go if the situation remains the same. My son Scott will be sixteen in three years time and he will instantly have the freedom to choose to find me. Which is why I keep my blog running.. I have said this over and over again during the last three years, all we want is equality. Not too much to ask in 2014. A fathers right to see his children and a child’s right to see his or her father. Men are often accused of being controlling, but when a mother denies a father access to his children and a child access to his or father then that is the extreme of controlling behaviour. But that seems to go unrecognised. Balanced? I don’t think so. Fair? I don’t think so. Equal? I don’t think so. Children are not tools to be used as a punishment against a father. 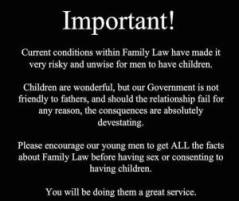 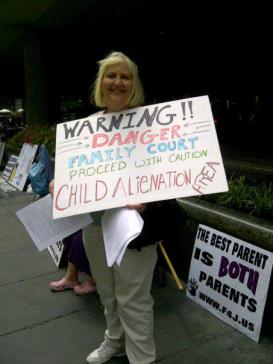 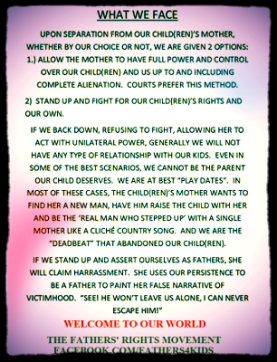 Dear Daughter, It’s OK to Be Wrong
I don’t want my daughter to be afraid of being wrong. I want her to embrace it. Here is why.
ASKYOURDADBLOG.COM|BY ASK YOUR DAD BLOG

Toward equal and/or shared parenting — tomjameslaw.com  Currently, most custody law reform efforts aim to either establish or refine a shared parenting paradigm (as distinguished from single parenting, which is still the most prevalent post-divorce para...

Let your children know that with you, they are in a safe space.   #JustBeDad Facebook.com/AmericanFathers

PARENTAL ALIENATION, PARENTAL ALIENATION DISORDER, PARENTAL ALIENATION SYNDROME
“Abusive” Parents Alienate and Psychologically “Batter” Children
In Alienation of Affection, Best Interest of the Child, child abuse, Child Custody, Child Support, Children and Domestic Violence, Childrens Rights, Civil Rights, Department of Social Servies, Divorce, Domestic Relations, False Allegations of Domestic Violence, Family Court Reform, Family Rights, Intentional Infliction of Emotional Distress, kidnapped children, Marriage, Munchausen Syndrome By Proxy, parental alienation, Parental Alienation Disorders, Parental Alienation Syndrome, Parental Kidnapping, Parents rights, Restraining Orders on December 8, 2009 at 9:45 pm
Parents following divorce are called upon to cooperate with the other parent after divorce in case involving children. Those parents who cannot put aside the anger, hate, and mental illness problems usually wind up “abusing” the children by alienating them from the the other parent.
Alienation has been called a form of psychological “battering” of children. For children that suffer from a custodial parent’s “battering“, I refer to an article from Jayne Major, Ph.D., an expert in the abuse that “abusive ” that accurately can describe the behavior of parents that commit Parental Alienation against a child”
“The alienating parent’s hatred can have no bounds. The severest form will bring out every horrible allegation known, including claims of domestic violence, stalking and the sexual molestation of the child. Many fathers say that there have been repeated calls to the Department of Family and Child Services alleging child abuse and neglect.
In most cases the investigators report that they found nothing wrong. However, the indoctrinating parent feels that these reports are not fabrications, but very, very real. She can describe the horror of what happen in great detail. Regardless of the actual truth, in her mind, it did happen.
Most of the alienated fathers that I work with are continually befuddled by her lying. “How can she lie like that?” They don’t realize that these lies are not based on rational thinking. They are incapable of understanding the difference between what is true and what they want to be true. A vital part of fighting PAS is to understand the severity of the psychological disturbance that is the source of it.”
For parents on the other end of this intense hatred from the “abusive” parent, most psychologist counsel being as actively involved with your children as possible, but sometimes, the psychological “battering” by the alienating parent eventually turns the child against the targeted parent. In some cases, the child loses all touch with reality, and becomes a carbon copy of the “abusive” parents and hates the everyone and the world.
That is why is has become even more imperative that Parental Alienation, Parental Alienation Syndrome or even Parental Alienation Disorder (as it has been suggested) be included in the next version of the American Psychological Association DSM book. With recognition by the APA, children can get real help for their problems and can be psychologically rescued from “abusive” and parents that “batter.”

My daughter, JJ, was angry—so much, it seemed she would reach up and shake the clouds until they thunder, and cold bullets of rain explode against the Earth.

The day started out so well—sleeping in late, and cuddling up on the couch with bowels of cold cereal on our laps while we watched cartoons. Then visiting the grandparents she missed and repeatedly asked to see. JJ romped and played with her cousins in the bright afternoon sun. She splashed in the pool, and dried off jumping on the trampoline. Grandpa ordered a pizza for lunch, and we all dove in—cheese dripping off our fingers, our faces smeared with spicy tomato sauce signaled delight.

JJ didn’t want to leave. I couldn’t blame her—her father, Mr. X, decided that he doesn’t like my parents and has been actively working to keep my children separated from their maternal grandparents, basically all my relatives, and any connection to our heritage. This was especially cruel because Mr. X used to allow the children overnight visits with their grandparents.

My parents created a room in the house for the children—with bunk beds to sleep and a closet overflowing with toys.

The dresser was filled with clothes my parents bought for my children. Even the kitchen cupboards were filled with brightly colored plastic plates in animal shapes, bottles of water, and healthy snacks for the kids—Grandpa made sure they ate organic, and drank purified water.
My children share a close, loving relationship with their grandparents; they suffer a tremendous amount of grief due to alienation and an unjust legal order tearing my family apart.

Which brings me to the park… I left my parent’s home to bring my daughter and my toddler, RJ, to a museum. Time was running short, and JJ was a bit cranky so I drove to the park instead. 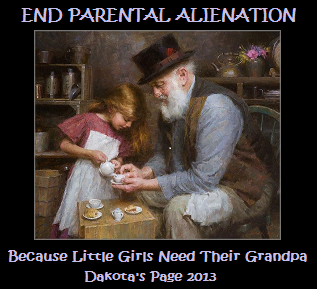 It was a warm, sunny day and the playground was filled with noisy children. RJ ran happily toward the slide. JJ hung back, almost refusing to walk. She crossed her arms over her chest, tucked her chin down and wouldn’t look at me. When I asked JJ what was wrong she only replied in grumbling noises. JJ glared at the playground like I was dragging her into the pit of hell. I did my best to ignore her, and tried to remain upbeat, hoping some distraction would lift the clouds—to no avail. When I tried to talk to JJ she completely ignored me, and continued to grumble.