The abuses of parents and children by Family Courts, social workers, and family law attorneys have harmed parents and children for far too long. We intend to end that abuse
Family court is designed by its makers to be probably the most dangerous life event parents and children can endure. It enables and profits from every inhumane instinct known to man—greed, hate, resentment, fear—resulting in abundant cash flow for the divorce industry and a fallout of parent and children’s misery.
And behind the curtain of this machine of misery we’ve uncovered its cause—the multi-billion dollar divorce industry, populated by judges, attorneys, and a machinery of tax-dollar fed “judicial administrators,” social workers that George Orwell would marvel at.
We’ve been delivering that message kindly for years now, yet the tide keeps rising on families in crisis. We’ve appealed to the county courts, state and local politicians, state judicial oversight bodies, United States Representatives, and just plain old human dignity, but the harassment and abuse of parents and children has only increased. A resort to federal court intervention in the widespread criminal collusion in state government was the next logical step.
It’s time to recognize Family Court for what it is—a corporate crime ring raiding parents and children of financial and psychological well-being, and devouring our children’s futures. And its not just divorce lawyers—its judges, “judicial administrators,” psychologists, cops and prosecutors—people we should be able to trust—in a modern day criminal cabal using county courtrooms and sheriff’s deputies as the machinery of organized crime.
Since state officials’ hands are too deep into the cookie jar to stop their own abuse, we’re seeking the assistance of federal oversight.
The present-day suffering of so many parents and children has and is being wrought within a larger system characterized by a widespread institutional failure of—indeed contempt for—the rule of law.

Family courts, the legal community, professional institutions such as the state bar, psychology boards, and criminal justice institutions have in the recent decade gradually combined to cultivate a joint enterprise forum in which widespread “family practice” exceptions to the rule of law are not only tolerated, but increasingly encouraged. Professional behavior that would only a few years ago be recognized as unethical, illegal, or otherwise intolerable by American legal, psychological, law enforcement, or social work professionals has increasingly achieved acceptance—indeed applause—from institutional interests which benefit from a joint enterprise enforcing the unwritten law of “who you know is more important than what you know.

(ABC 20/20) will expose the Judicial Misconduct of Judge Knutson.

In this lawless behavior’s most crass infestation, Family Court Judges are regularly heard to announce, in open court, “I am the law” and proceed to act accordingly with impunity, indifference, and without shame.
The effect on parents and children seeking social support within this coalescing “family law” forum has not been as advertised by courts and professionals—a new healing—but instead a new affliction: an ‘imposed disability’ of de rigueur deprivation of fundamental rights in the name of ‘therapeutic jurisprudence’ funded by converting college funds into a bloated ministry of the Bar Associations leaving families and their children with mere crumbs of their own success.
Many family court judges regularly administer such obnoxious ‘renegade’ justice every day, in open defiance of the rule of law. ‘Sober as a judge’ these days has a whole new meaning.
Family Courts, including judges, blame “Litigants Behaving Badly” for harms enabled—indeed largely manufactured—by the Domestic Dispute Industry’s own longstanding predatory commercial practices.
Their “Litigants Behaving Badly” theme is part of the self-delusional propaganda engaged in by so many [divorce industry] members who, rather than recognizing the harm their industry enables and “healing themselves”, instead blame their own clients, who, quite true, do regularly abuse process, their loved ones, and even themselves—in perfect compliance with [divorce industry] instructions.
Divorce lawyers illegally conspire with judges to steal from parents as part of a racketeering criminal enterprise—and brings over 30 claims of federally-indictable crime.
“Civil rights violations, fraud, and obstruction of justice are federal crimes—even for judges.
Lawsuit seeks to hold judges and courts personally responsible for overseeing the crime committed by the attorneys and social workers in their courtroom. Judges have a legal and ethical duty to ‘ensure rights’ under the judicial canons of conduct. It’s just not possible that intelligent lawyers like judges don’t understand exactly what goes on in their courtrooms, yet they allow it to continue.
This judicial collusion is far more serious crime than even the fraud of divorce attorneys themselves.
We need reform toward a more humane family dispute resolution solution. They’ve treated us as enemies of the state. When we thought we’d be welcomed, or at least heard, we’ve instead become targets of prosecution and terrorist threats. They’ve assaulted us, harassed our members including threatening “gun cock” and death threat late night phone calls, attacked our businesses, professional licenses, and threatened to jail and extort us with further crime.
It’s outrageous that our own government allows this to happen, and we’re asking the federal court to protect our members as we pursue the civil and criminal charges against the courts. A complete set of filings and exhibits is available from CCFC’s Facebook page  at  www.Facebook.com/ccfconline
We seek to promote the health and success of all families–parents and children equally and alike. We perceive that parents and children presently lack effective and independent advocates within government and the civil and criminal justice system, and as such their rights and interests are regularly compromised in favor of the institutionalized interests of others, including government, private attorneys and professional service providers, and the enormous domestic dispute industry.
We’re organizing, officers, and affiliates are professionals dedicated to improving social, governmental, and justice system processes concerning domestic relations, child rearing, parenting, constitutional law, child custody, and domestic violence.
Many of our members are mothers, fathers, and children who have withstood abundant hardship resulting from the current practices of what is generally described as the “Family Law Community.”
These injuries and insults include fraudulent, inefficient, harmful, and even dangerous services; an institutionalized culture of indifference to “clearly-established” liberties; insults to the autonomy and dignity of parents and children; extortion, robbery, abuse, and more, delivered at the hands of eager operators within the divorce industry.

…and often to show your support to ABC for STANDING UP and SPEAKING OUT we need more true Investigations into the Corruption of our Government, our Elected Officials and our Judiciary. 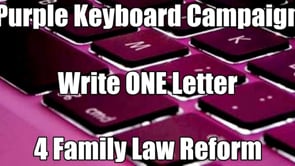 10 thoughts on “The Corruption of our Government, our Elected Officials, and our Judiciary.”