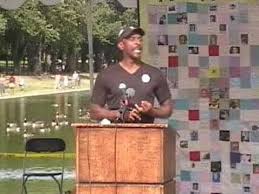 Three time Super Bowl winner Tim McKyer of the San Francisco 49ers (pictured above speaking at a Washington, DC Parenting Rally) was a keynote speaker at our Parent Convention held at the Hotel Utica in April, 2011

Okay so you’re outraged by the injustices of divorce or family court, you may be a loving dad forced out of your children’s lives, a victim of corruption or false charges, maybe you’ve even “done time” in a “child support” debtors’ prison reserved these days for male parents only. The continuing erosion of the most basic rights historically protected by our men and fathers in uniform has reached shocking dimensions.

Well now is your chance to do something about it. Dr. Koziol has been in San Francisco advocating for parental equality and court reform. The group he has been promoting has set up a website for you to consult for purposes of joining a rally for court justice. Details about that rally can be found at www.YourParentalRights.com. If you can’t make it, call a friend near San Francisco to join the event outside the stadium in Santa Clara this Sunday.

Followers of Leon Koziol.com, Parenting Rights Institute and National League of Fathers, Inc. are aware of Leon’s sacrifices and commitment to justice in these courts.

Family advocates from numerous states attended to give testimony ultimately submitted in a report to the U.S. Justice Department.

Unfortunately divorce and family courts have become a trillion dollar industry. Without proper financing, the reform movement continues to get crushed by high powered lobbyists, government suppression and domestic bar associations. This site has repeatedly featured the 2013 testimony of Dr. Koziol before the Moreland Commission on Public Corruption at Pace University which exposed alarming judge misconduct.

This Commission was created by the governor to root out growing corruption but it was prematurely dissolved when evidence began implicating the governor himself, at the time “substantially” delinquent in his own child support obligations according to the New York Post. Fortunately an aggressive federal prosecutor, Preet Bharara, secured Commission files resulting in the convictions of top leaders of New York’s Legislature.

But it was not nearly enough considering all the corruption which persists there. On a positive note, after the Moreland fiasco, our FBI began posting signs along New York’s highways asking victims to report corruption of our public servants, including family judges.

Here at Leon Koziol.com, we will challenge the prestigious law enforcement agency to act on our upcoming report. It will be published here regardless of a recent gag order by family judge Daniel King of Lowville which is being challenged in a higher court.

Our Super Bowl series this past week has generated calls from around the country regarding court corruption in other states. Momentum is building. Now is your chance to make a difference with your own sign or simply joining the rally this Sunday. Unless you make noise, the violators will be ignored and the injustices to our families and children will continue. Do not expect others to make that noise for you. You can also give us your confidential tips which we may research and include in our report. However it must also be reiterated that we are not a public agency. We rely on your donations.

Leon is currently on a book publishing assignment on the West Coast but you may contact us at our office at (315) 380-3420, Dr. Koziol directly at (315) 796-4000 or by e-mail at leonkoziol@ParentingRightsInstitute.com.

See you at the Super Bowl!

Do fathers matter anymore? Should we be paying “child support” so that our children can be taken from us, alienated from their true dads to feed a trillion dollar industry, and made to believe that fathers are inherently inferior in divorce or family court?

Why are fathers still 83% of support obligors according to the U.S. Census Bureau with mothers winning roughly 90% of custody conflicts? Why are male parents being condemned to debtor prisons based on a revenue generating law while mothers who commit perjury are excused time and again with no similar jail sentence?

In New York, a state appeals court in Rochester entertained a lawsuit to free chimpanzees from their caged conditions, yet human fathers are receiving no similar protection. Indeed the court ruled that the petitioners in Nonhuman Rights Project v Boniello should have filed a habeas corpus action (instead of mandamus) which by legal definition is limited to incarcerated persons and children in custody of the state.

Fathers such as Michael Brancaccio served a maximum (caged) term for a support debt. It also landed him on life support, medically traced to the stress caused by his inability to reconcile that confinement with violent felons serving less time. Walter Scott, an unarmed father, was shot dead in the back fleeing a support warrant last year in South Carolina. One of every eight inmates in that state’s prisons are debtor fathers.

When do good fathers finally stand up for themselves and declare “enough is enough?” When will they finally leave the bowling alleys and basketball stands to press the overdue message that we matter too? Gay marriage has achieved far greater success while veterans and law enforcement continue to register high suicide rates due to family court abuse, see i.e. Pearce v Longo, 766 F.Supp.2d 367 (murder-suicide by police investigator leaving support court) and Purple Heart’s Final Beat, Second Class Citizen.org (proud Iraq war veteran taking his own life rather than face felony support warrant and prisoner status).

Throughout pro football world, coaches and players display pink ribbons and attire to promote a cure for breast cancer, and of course we applaud them for it. But prostate cancer will claim many of these men before their own career rewards are achieved. Where are the blue ribbons? Fathers’ and men’s rights have been remanded to the cellar of public attention because of a liberal propaganda machine which put it there.

The sexist slur “dead beat dad” is still being used by Arizona Governor Doug Ducy in his 2016 State of the State address, a state which hosted the NCAA football finals. Such bigotry persists because our third  branch of government promotes it in halls of justice where we would expect the opposite. Family courts have been turned into capitalist courts with judges abandoning their neutral roles to raise revenues and gain favor from court appointed “evaluators” who feed off of discrimination and lawyer instigated controversy.

It is a highly concealed government enterprise which has reached epidemic proportions. Father discrimination, oppression and marginalization should be the number one issue in the presidential race because of its impacts on all others. Yet we see it nowhere on the policy agenda of any candidate. How much longer will the male half of our parenting population remain idle to these growing injustices? How much longer will the victims hide behind the skirts of women commanding the national agenda?

Fortunately there are committed groups of parents in California which recognize this epidemic and are prepared to act. They have selected the greatest sports event to proclaim a basic message: We’ve had enough of court corruption! But the organizers have also emphasized that all parent-child relationships will be the generic diluted theme. While I support that as much as I do a cure for breast cancer, it is unlikely to captivate the media and masses at a Super Bowl. I will reiterate that “Fathers Matter.” They remain the principal victims, and justice will matter when equality is truly achieved in all contexts.

If women’s equality stops at the doorsteps of family court, then the entire movement was a hoax, a farce and hypocrisy of monumental proportion. My successful lawsuits over 25 years for women discriminated and harassed in the workplace were in vain, this coming from a civil rights advocate who represented the former president of the National Organization of Women (NOW). We need to send a recognizable message at the Super Bowl where exemplary fathers such as Peyton Manning are the revenue generators.

Organizers of this rally are focused on achieving justice for all parents. However fathers remain the prevailing injustice which harms their own mothers, daughters, sisters, women partners and family members. We need your help and participation. I have been communicating with rally organizers Ralph Walker and Shiv Paletti. They have a site, http://www.YourParentalRights.com  for those interested in joining this rally or you can just locate them outside the stadium at Santa Clara (near San Francisco where I have been assisting the effort). Contact me at leonkoziol@parentingrightsinstitute.com or personally at (315) 796-4000. You can call Mr. Paletti for event details at (408) 449-0442 or 892-8381.

7 thoughts on “Outraged by the Injustices of the Family Court”

A Voice for Men