In this second installment of our three-part series on parental alienation, we turn our attention to alienated (targeted) and alienating parents. Parental alienation is the “programming” of a child by one parent to denigrate the other (targeted) parent, in an effort to undermine and interfere with the child’s relationship with that parent, and most often occurs within the context of a child custody conflict. This includes the “legal abuse” of parents who have been disenfranchised from their children’s lives subsequent to sole custody and primary residence judgments. Within an adversarial legal process, non-custodial parents are often subjected to shame and stigma, lack of access to their children, and devaluation of their role as parents. And those who speak about the pain and woundedness in their lives are subjected to a mean-spirited cultural response, where their talk of woundedness is mocked.

Most alienated parents are non-custodial fathers, and engaging these fathers is a significant challenge, as clinical and research literature has described the lack of “fit” between fathers and therapeutic agents as emanating from two sources: the characteristics of men and fathers themselves (their resistance to counseling andtherapy), and aspects of the therapeutic process (which have failed to successfully engage fathers). Patterns of traditional gender-role socialization directing men toward self-sufficiency and control, independent problem-solving and emotional restraint have largely worked against fathers being able to acknowledge personal difficulties and request help.

A fear of self-disclosure and a feeling of disloyalty to one’s family in exposing family problems are not uncommon; a fear of losing control over one’s life and the need to present an image of control or a “facade of coping” in the form of exterior calm, strength, and rationality, despite considerable inner turmoil, characterize many fathers. Professional service providers do not always consider such psychological obstacles to therapy and thus do not address fathers’ unique needs. The research on divorced fathers is clear about their most pressing need: their continued meaningful involvement with their children, as active parents. The lack of recognition of this primary need is the main reason for therapists’ lack of success in engaging alienated fathers.

Above all, the key to engaging alienated parents is to validate their parental identity, and combine advocacy efforts with counseling focused on enhancing their role as active and responsible parents. Human service professionals have been notably absent in the politicsof reform with respect to the issue of legal child custody, yet they are desperately needed as allies in policy reform efforts. An important role of human service professionals in supporting alienated parents is through such advocacy and activism, challenging the custodial/non-custodial and residential/non-residential parent dichotomy and advancing the cause of co-parenting.

An active program of outreach is essential as alienated parents report a lack of effective support services, and they remain a highly vulnerable population. Service providers need to be persistent and proactive, as it takes time to build and sustain engagement in the context of these parents’ feelings of isolation, helplessness, and their tendency to wait until there is a crisis before accessing support. Parents who were highly involved with and attached to their children and suddenly find themselves forcefully removed from their children’s lives experience profound woundedness. The experience of being removed as a loving parent from the life of one’s child via a sole custody order strikes at the heart of one’s being.

Suicide rates are reported to be of epidemic proportions among parents, fathers in particular, who are struggling to maintain a parenting relationship with their children (Kposowa, 2000; Kposowa, 2003); and legal abuse has been noted as a key factor in these cases. Being vigilant regarding symptoms of post-traumatic stress andsuicidal ideation among non-custodial and alienated fathers and mothers is an essential role for service providers. A strengths-based approach, recognizing alienated parents’ aspirations to their children’s well being and the experience, knowledge and skills that they can contribute to this well being, while maintaining the high road in addressing the alienation, is vital.

And finally, what about the alienating parent, who uses a combination of fear, lies, flattery and gratification of material desires to win over their child, and whose sense of entitlement and desire to control the child is greater than the desire to nurture and care for the child? As Amy Baker writes, parents who try to alienate their child from the other parent subtlely or overtly convey a three-part message to the child: I am the only parent who loves you and you need me to feel good about yourself; the other parent is dangerous and unavailable; and pursuing a relationship with the other parent jeopardizes your relationship with me. 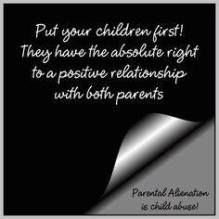 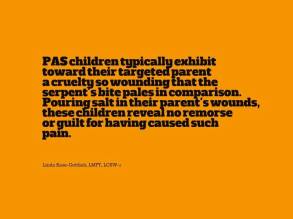 Alienating parents are themselves emotionally fragile, often enmeshed with the child, with a “sense of entitlement, needing control, knowing only how to take” (Richardson, 2006). Yet although it is easy to pathologize and blame such parents, it must be remembered that alienating behavior is encouraged in the context of a legal adversarial forum where the goal is to “win” the custody or residence of one’s child. And although some would recommend a solution of removing child custody from alienating parents and placing children in the care of non-alienating parents, it is often very difficult to adjudicate who actually is the alienating and who is the targeted parent. Family law judges are not trained in the finer points of child development and family dynamics, and can be easily swayed by legal arguments made on behalf of disputing parents, including alienating parents.

On the matter of parental alienation, I have come to see that the problem is systemic innature; that is, the problem lies primarily in the adversarial nature of legal determination of parenting after divorce. Parents are set up to fight in an effort to win “primary residence” or “custody” of their children, and the system tends to reward those skilled in adversarial combat. Parents often win their case by disparaging the other parent as a parent, in effect engaging in alienating behaviors, and the system thereby encourages and produces alienating behavior. A legal presumption of co-parenting, rebuttable in established cases of child abuse and family violence, may in fact be the most effective means of combating parental alienation and curtailing its damaging consequences, while at the same time protecting the safety and well-being of children at risk of abuse.

The final installment of our three-part series on parental alienation will examine programs, services and interventions that combat alienation, and seek to reunite estranged parents and their children while addressing the significant clinical challenges in working with alienating parents.

Kposowa, A. (2000). “Marital Status and Suicide in the National Longitudinal Mortality Study.” Journal of Epidemiology and Community Health, 54, 254-261.

Post-traumatic Stress in the Rupture of Parent-child Relationships.

Leave a Reply to Stand Up For Zoraya Cancel reply