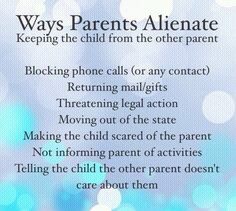 Why would someone carry on with Severe Parental Alienation for over 25 years? “In many cases, there is a history of severe psychological problems and agitations before the alienation tactics are ever employed.” “These people are damaged and in desperate need of professional psychological help and extensive therapy. They often have clinically diagnosable issues such as BPD (borderline personality disorder) .”!!!!

Severe Parental Alienation: These parents have one mission, to aggressively and viciously attack and destroy the previously healthy and loving relationship that their children have with the other parent. During a separation and the ensuing divorce, the targeted (rejected) parent almost always becomes a bitter enemy in the mind of the alienating parent. They must “win” at all costs. They are determined to be the only parent in their child’s life. They resent and get violent (verbally and many times physically) with anyone that sets healthy boundaries with them in their quest for dominance and control over the other parent. All of which can lead to a long and bitter child custody battle which is never ending.

In many cases, there is a history of severe psychological problems and agitations before the alienation tactics are ever employed. Many times these individuals suffer from some type of mental illness. The alienator perceives and portrays themselves as the victim. They are obsessed, consumed and driven, by the goal of destroying the “target” (rejected) parent in the eyes of the child (or children). They enroll family, friends, co-workers, neighbors, schools, churches, police, and the courts in their quest to remove the target parent from their child’s life. They constantly create opportunities, to reinforce their agenda to manipulate the children into believing their false realities. Anyone that might support a realistic and positive view of the “targeted” (rejected) parent is cut off from the child’s life. They also remove any evidence of positive interaction with the child and the other parent, in an effort to complete the brainwashing process, such as pictures, cards, presents etc. If they ever feel guilty, they dismiss that guilt with statements like “I know what’s best for my child” or “I’m just protecting them from abuse or negligence”.

The child is both a weapon to be used against the other parent and a tool to make them feel emotionally complete. They are so consumed with themselves, their hatred, and the need to control, that they are only interested in their own needs. They refuse to see the pain and destruction they are causing in the life of their child. Even after the alienation is complete, a severe alienator will often continue to use the child and the courts to further their revenge on the targeted parent with excessive litigation, unnecessary bills and continued accusations of both physical and sexual abuse. Often they are not satisfied until they see the complete destruction of the other parent both emotionally and financially. They need the rejected parent branded as an “abuser” in order to feel good about themselves and their actions. These people are damaged and in desperate need of professional psychological help and extensive therapy. They often have clinically diagnosable issues such as BPD (borderline personality disorder) . Most will never get the help they need unless it is court ordered, which is rare indeed.